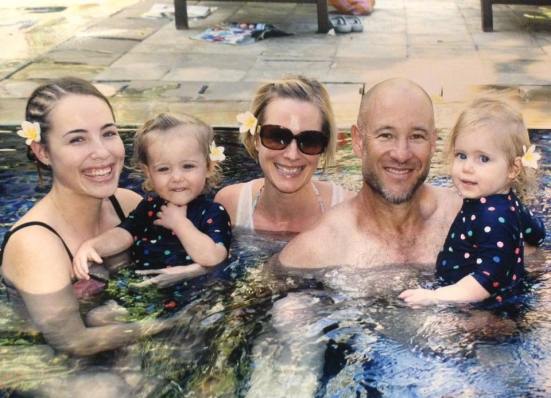 I can’t say that the thought of travelling overseas with the twinnies really excited me but in a lapse of judgement 6 months ago the notion of Bali with babies, family and friends to celebrate my 40th seemed not so daunting.  I knew that no matter what, being totally organised was the key to survival and hopefully some fun on the way.

Saturday 20th May and we arrived at the airport 2 hours before our flight.  The girls seemed quite content as we scrambled onto the bus link from the carpark to the airport with 2 dodgy strollers, our suitcases and carry-on luggage.   Thankfully we had our 17-year-old daughter and some friends travelling with us to lend a hand.

Airport check-in went smoothly and we went through to the lounge to relax and prepare before boarding.  The twins were given free rein on the airport playground to burn up as much energy before they would be restricted on the flight.  Miss Ivy attempted to show her playground authority only to be overturned by a boy a year older than her, but points for determination.

An hour before our flight was due to take off it was announced that the flight would be delayed for an hour.  Well the hour came and went as we were told again that the issues with the plane would be resolved in another hour.  4 hours later and the flight was cancelled.  I broke out in a sweat as my mind scrambled at any possible ways to ‘fix’ the situation.  Our whole group rallied together determined to make it to Bali that night.

As the multitudes herded into line to collect their luggage, looking confused and frustrated, I jumped on the phone to the airline figuring this would have to be the easier option.  Well one hour later after running through various flight scenarios over the phone I was told that my best shot was to go to the counter at the airport and sort it out.  Thankfully Miss Scarlett had settled into the arms of one of our friends and had a nap.  Ivy continued to explore the luggage conveyor belt looking for an opportunity to ride it.

After pleading with the flight staff for a suitable flight to accommodate our whole group and playing the ‘twins card’ (well that’s gotta’ be worth something after dragging them through the airport for hours) we were offered a flight to Singapore leaving 10:40pm with a 6 hour layover and a 2 hour flight to Bali.  At least we would still arrive in Bali a few hours before the rest of our crew who had a flight for the following day.

I figured this option could work in our favour as we could all get some sleep on the overnight flight….it seemed logical at the time.  Unfortunately we ended up being “that” family with the crying babies…you know the ones that no-one wants to be near, the ones that everyone is thinking why the hell can’t you shut those kids up!!  Yep that was us 😕 Thankfully we had purchased a ticket for our son who was unable to make the trip so we had a spare seat…this was a God send.  So with Shane on one side and me on the other we were able to get the twins to have a couple of hours sleep lying in the spare seat between us.  After a while the girls tag teamed who would be awake.  At one point, in a desperate attempt to get comfortable I lay back in the birthing position with my legs up in the air and Scarlett laying in between my legs while hubby was squished in his single seat with Ivy sleeping on his lap.  Certainly not my finest hour but at least I managed to get a measly hour or two sleep.

Once landed in Singapore we booked into a transit hotel for a 6 hour block and that would have to be the best $130 bucks I have ever spent.  Myself, hubby and the twins squeezed into a queen bed while our other daughter had the single and we crashed for 5 hours.  I think if it wasn’t for that we would’ve all gone crazy.

So after 24 hours from the time our flight from Perth was scheduled to leave we finally arrived in Bali.

The girls are quite sensitive to loud noises.  If a plane flies over our house or the rubbish truck drives down our street they cling to me like baby chimps in absolute fear.  Because of this I felt pretty anxious about the flight to Bali along with the craziness of the place….the constant buzz of traffic, obtrusive hawkers and the thick crowd of tourists.  But to my surprise none of these things bothered the girls.  Not even the constant touching of the curious Balinese and the few Asian tourists who felt at liberty to have personal snap shots with the girls.

Meal times for the twins were a bit challenging as they both seemed to have funny tummies so they didn’t eat a lot.  Each morning at our buffet breakfast I would make them a sandwich and get a couple of mini bananas and pikelets so they had a semi-normal bland lunch for when we were out and about.

Our days were spent hitting the streets in the mornings, stopping off at one of the many little restaurants for lunch, nap time for the girls in the hotel room, swim in the resort pool then off to dinner with our group.  We even managed to tag team with the twins so that myself and hubby could indulge in the cheap massages.

After assurance from seasoned Bali travellers we got a nanny for 3 of the evenings so we could go out without dragging the twins around.  I cannot recommend this enough…a cheap nanny costing around $7AU per hour who came highly recommended.  This also allowed the girls to bed at a reasonable time setting them up to be easier the next day.

So my personal recommendations travelling to Bali with twins….

My 5th time holidaying in Bali but first time with the twins.  In comparison this trip was in no way relaxing but we still managed to have fun and hopefully encourage our twins to be more adaptable along the way. 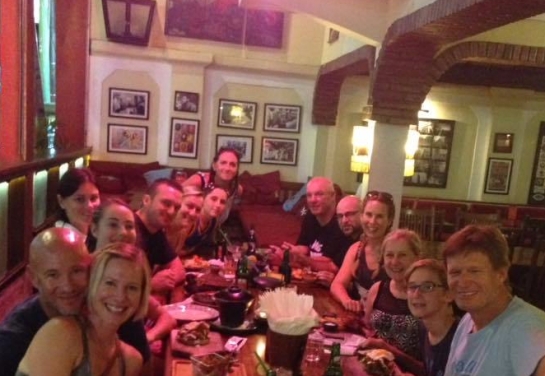