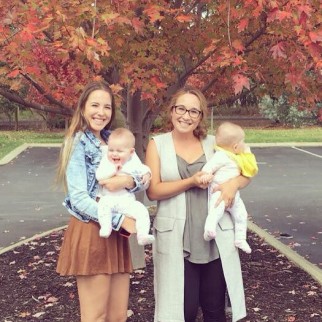 Our girls…just missing our son

People warned me about the weird and wonderful comments I could get being a mum of twins but I admit I was skeptical….however, they were right.

It all began when I was pregnant with the twins.  “Is this your first?” they would ask and being the relatively open person that I am I would respond cheerfully “well actually its number 4 and 5.” I should’ve known that this would only instigate a range of interesting and personal questions.

I remember one conversation with a shop assistant which began just like this and ended up almost with my whole life story.  Not to say there is anything that exciting to share but after the questions such as if this was my second marriage and when I responded that it wasn’t you could see the wonder in her eyes and then the prying into why we needed IVF.  Before I knew it I was led into the trap of TMI (too much information).  Now I can’t blame the shop assistant as I was guilty of over sharing and it wasn’t the first time.

These situations didn’t bother me while the twins weren’t in tow but once they were born it was a different story.  My shopping trips consists of being stopped at least once and generally I don’t mind a bit of chit chat as people stare delightfully at the girls (except when I hear the ever repetitive “wow you’ve got your hands full”) but sometimes my trip to the shops consists of a crying baby or two.  This was one of those days…

I was quite excited about getting out of the house and doing a bit of shopping with the girls but unfortunately Miss Ivy wasn’t happy with being in her pram…I’m not referring to a bit of winging, this was all out balling as though something tragic had happen.  According to Ivy it was tragic, I wasn’t carrying her at that point of her sadness.  After numerous stares and not to mention no-one making any effort to clear the path (double prams are not that easy to maneuver around busy shopping centers) I was left with no choice but to carry Ivy while pushing Scarlett in the pram and shopping.

This was no easy feat and probably one of the few times where it would’ve been fab for any random stranger to come up and offer to give me a hand.  However, it seemed even requesting a hand carrying a few items from one of the staff members was a bit of an inconvenience.

Anyway as I was lining up at the check out there was a lovely elderly lady standing in front of me.  After looking at my girls and giving them some smiles she asks “is it a boy and a girl?” Now I don’t mean to be blunt but if they are both dressed in the same clothing, pink I might add, is it not some what obvious that they are both girls???  I know that being gender neutral is all the rage now but surely it was plain to see they were both girls…I really wanted to ask her which one she thought was the boy but didn’t have the time or patience to discuss it.

After politely responding that they are both girls she made a comment that I have heard other ‘multi’ mums complain about but this was my first experience.  She proceeded to say that she had 2 girls that were 18 months apart so it was basically like having twins.  Arggghhhhh are you kidding me woman!!  My first 2 were 13 months apart and honey it ain’t nothin’ like having twins!! (picture that with some Jerry Springer show swag).

I didn’t say any of this but it was what I was thinking.  Instead I did a little chuckle and nod and we went our separate ways.

In all fairness this lady was probably just wanting to converse with someone and felt we had common ground but when you are dealing with a mum of twins at the shops, one baby crying and the usual sleep deprivation in the mix it can be a recipe for disaster.

One thought on “The Things People Say”